The newcomer guide to schooling in Canada

As per the 2018 Organization for Economic Co-operation and Development (OECD) data, Canada is the most educated country in the world. To highlight the importance of education in the lives of Canadians, in 2014, Canada spent 6 per cent of GDP on education compared to the Organisation for Economic Co-operation and Development (OECD) average of 5.2 per cent.

When moving to a new country, as a parent, you want the best for your kids, and education is often a priority item on that wishlist. The schooling system in Canada may be different from your home country and might seem confusing with information from varied sources.

In this article, we will explore the basics of schooling in Canada, explain the types of schools, grade structures, levels of education, and outline the process to enroll your kids in school, providing helpful tips all along to guide your decision-making.

Basics of school education in Canada

School education in Canada is mandatory for children aged five to 18. Generally, the school year begins at the end of August, or early September, ends in June, and is divided into periods or quarters (also called terms or semesters). The months of July and August constitute summer break. There are a few year-round schools and some that have a year that runs from mid-August to the end of May.

Most schools follow a five-day week and work from Monday to Friday. A typical school day in elementary schools is usually from 8:30 a.m. to 3:00 or 3:30 p.m., with two 15-minute breaks and an hour for lunch. In high schools, hours are usually from 8:30 a.m. until 2:30 p.m. Extracurricular activities and sports are scheduled after school hours.

Tip: Families immigrating with kids should plan their move, taking into consideration the start of the school year as it would ensure continuity of grades in Canada.

Types of schools in Canada

There are two main types of schools in Canada:

Over 95% of Canadians choose public school education for their children. These schools are funded and run by the provincial or territorial government. Each province/territory is divided into school districts governed by a superintendent and a locally elected school board (or board of education) that decides instructional policies, makes hiring decisions, purchases school equipment and oversees daily operations. Most public schools in Canada are co-ed, meaning boys and girls learn together in the same classroom.

Only a fraction of students in Canada attend private schools as they are considered to be a costly affair. Depending on the type of school you decide on, annual tuition can range from $4,000 CAD up to over $100,000 CAD. Private schools are also very selective of their students and hence, can be difficult to get into.

Within public and private schools, you may come across Catholic schools:

Catholic schools participate in the mission of the church by integrating religious education as a core subject in their curriculum. They may have specific admission criteria and are considered a good alternative to private schools. Canada’s provincial governments are supposed to avoid endorsing specific religions, and hence, any religious school must be privately-run. The exception is Catholic schools, which are publicly-funded in the provinces of Alberta, Saskatchewan, and Ontario.

A very small fraction of Canadian parents opt their children out of both public and private schools and educate them at home – this practice is known as homeschooling. Homeschooled kids are still required to pass Government-mandated exams in order to have their education officially recognized.

What is early childhood education?

Early childhood education (ECE) is usually provided to a child aged three to five. However, some preschools admit younger children, including toddlers, between one and two years old.

General age criteria and types of child care programs for ECE in Canada:

Note: At times, certain terms such as preschool and nursery may be used interchangeably. Preschools tend to focus more on early learning and academics than nurseries, daycare and childcare centres.

What age does a child start school in Canada?

In Canada, legally, children under five years of age aren’t required to attend school. This means most Canadian preschools, nurseries, childcare, and daycares are private. Some receive funding, and most are regulated by the government.

Tip: Early education might be a good option for families who don’t have English or French as their first language as it will help the child learn these languages prior to starting kindergarten or elementary school.

What are the different types of preschool programs?

There are various types of preschools in Canada, such as:

School grades and levels of education in Canada

Schools in Canada have 13 different grades (kindergarten + grades 1 to 12), one for each academic year. These grades are usually divided into phases such as elementary, middle school and high school – which are often different physical schools. As indicated in the chart below, certain provinces/territories may have additional phases or may use different terminology for each phase. 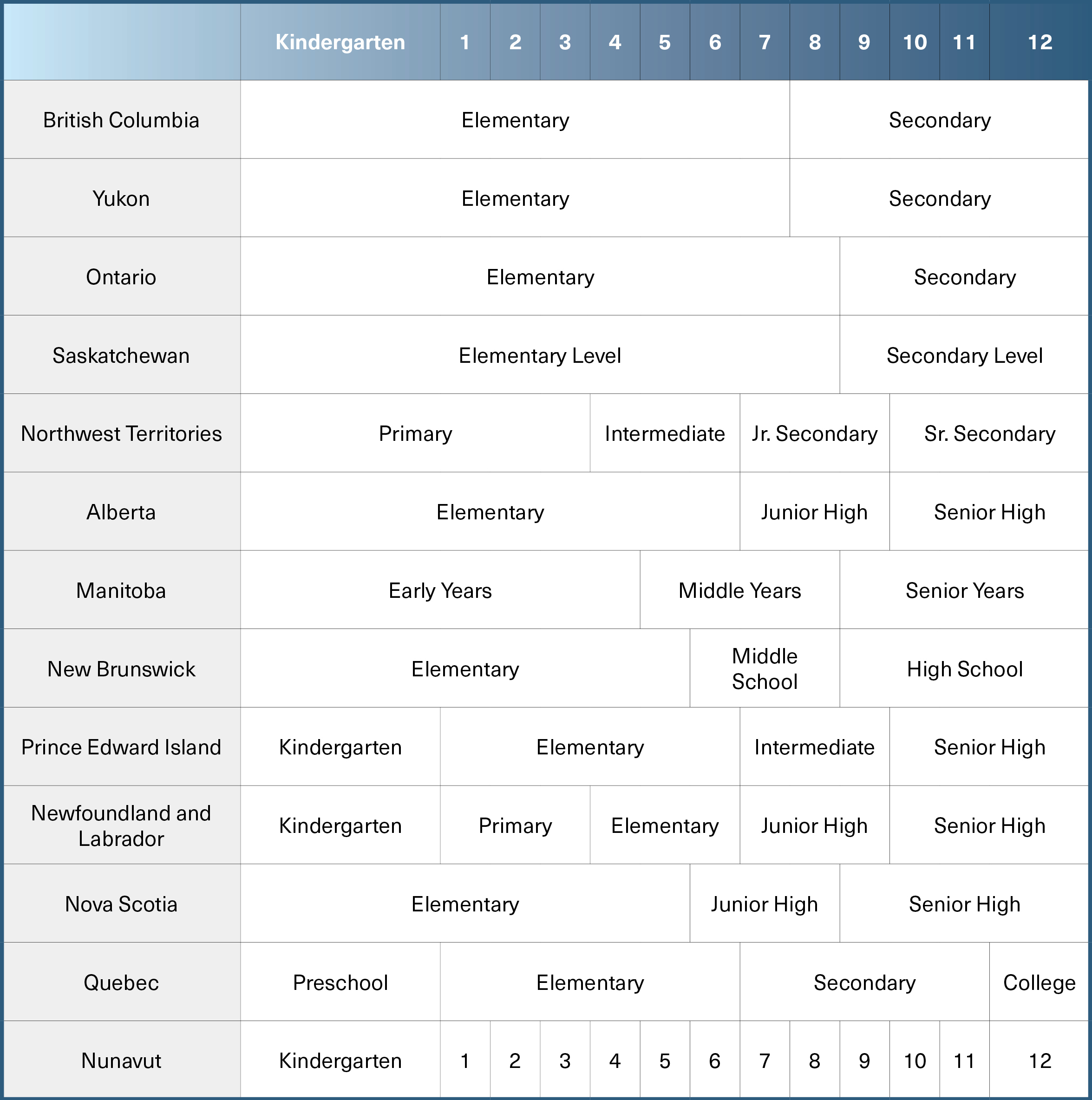 How to enroll your kids in school: Process and requirements 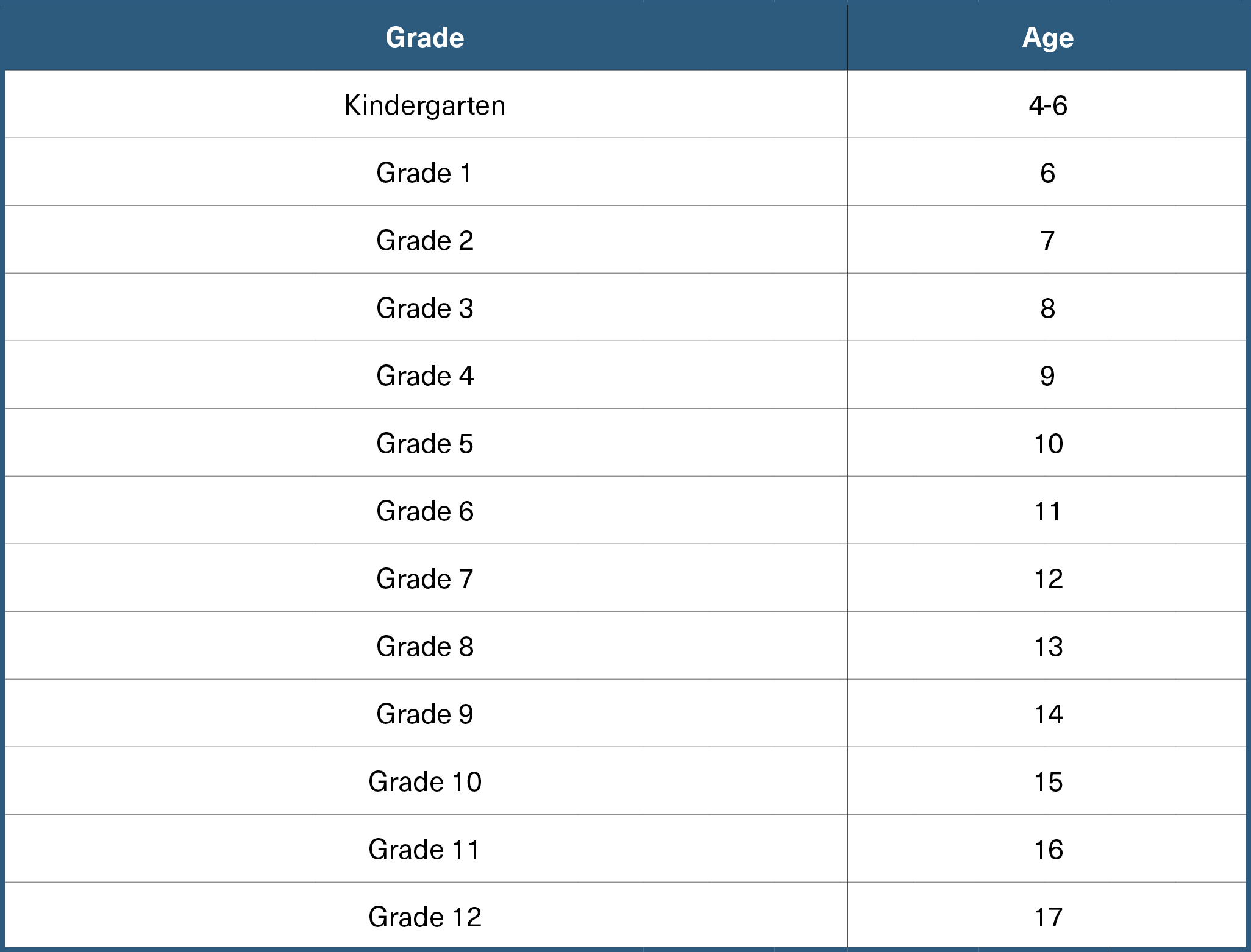 These documents are used to assign kids to the relevant grade.

How to enroll your child in school

Generally, the enrollment process differs by school type. Here’s an overview of the process to enroll kids in a public school in Canada:

Tip: If you’re moving to Canada in the summer (months of July and August), note that school offices may be closed for summer break. Hence, it would be advisable to reach out to them in the spring, before you arrive.

When a student enrols in a public school, a record file is opened for the child (which follows the student throughout all school years), and there’s a continuous evaluation system throughout all grades. Students are marked on each essay, exam and course completed in each subject studied throughout their 13 years of education (Kindergarten to grade 12).

Students are exempt from exams up until grade 8, and grades are based on the in-class evaluation, tests, assignments, homework, and class participation. The final score is a weighted average of the final exams, continuous class evaluations, tests and quizzes, practices etc.

Children get a report card several times during the school year that informs you about their progress.

Generally, the following grading system is used in high schools throughout Canada:

All grades are in relation to the general standard achieved at a particular school, which usually makes it difficult to compare standards in different schools and provinces.

Extracurriculars are activities that take place before and after school, or during lunch hours. They include sports, music, arts, drama, photography, hobby clubs, etc. Each school offers different extracurricular activities. If a club of interest does not exist, students can set one up one.

Field trips are often organized by schools for students to visit places that are relevant to their education. They include places such as museums, workplaces, cultural institutions, and city neighbourhoods.

Importance of extracurriculars in Canadian education

Canadian colleges, universities, and employers assign considerable importance to extracurricular achievements. Hence, these extracurricular activities can not only help your child pursue their interests outside of academics, make friends, and get used to the Canadian school system, but also prepare them for a promising career.

Some schools have SWIS workers available to assist newcomer families and students adjust to life in Canada. SWIS workers provide information (one-on-one and in groups) about all kinds of things. They can also help you get assistance from other people if you need it.