As the centre of Canada’s oil and gas industry, Calgary, Alberta is a draw for newcomers from around-the-world. With its quality of life and warm community feel, this city has a lot to offer individuals and families looking to settle in Canada. Here is what you need to know about living in Calgary and some of the best neighbourhoods to explore.

Sitting on the foothills of the Canadian Rockies in the Prairies, Calgary is one of the fastest-growing cities in Canada and is ranked as the fifth most liveable city in the world. The cosmopolitan city has a population of over 1.5 million people and is home to a diverse range of ethnicities, including Chinese, Ukrainian, East Indian, Filipino and African. 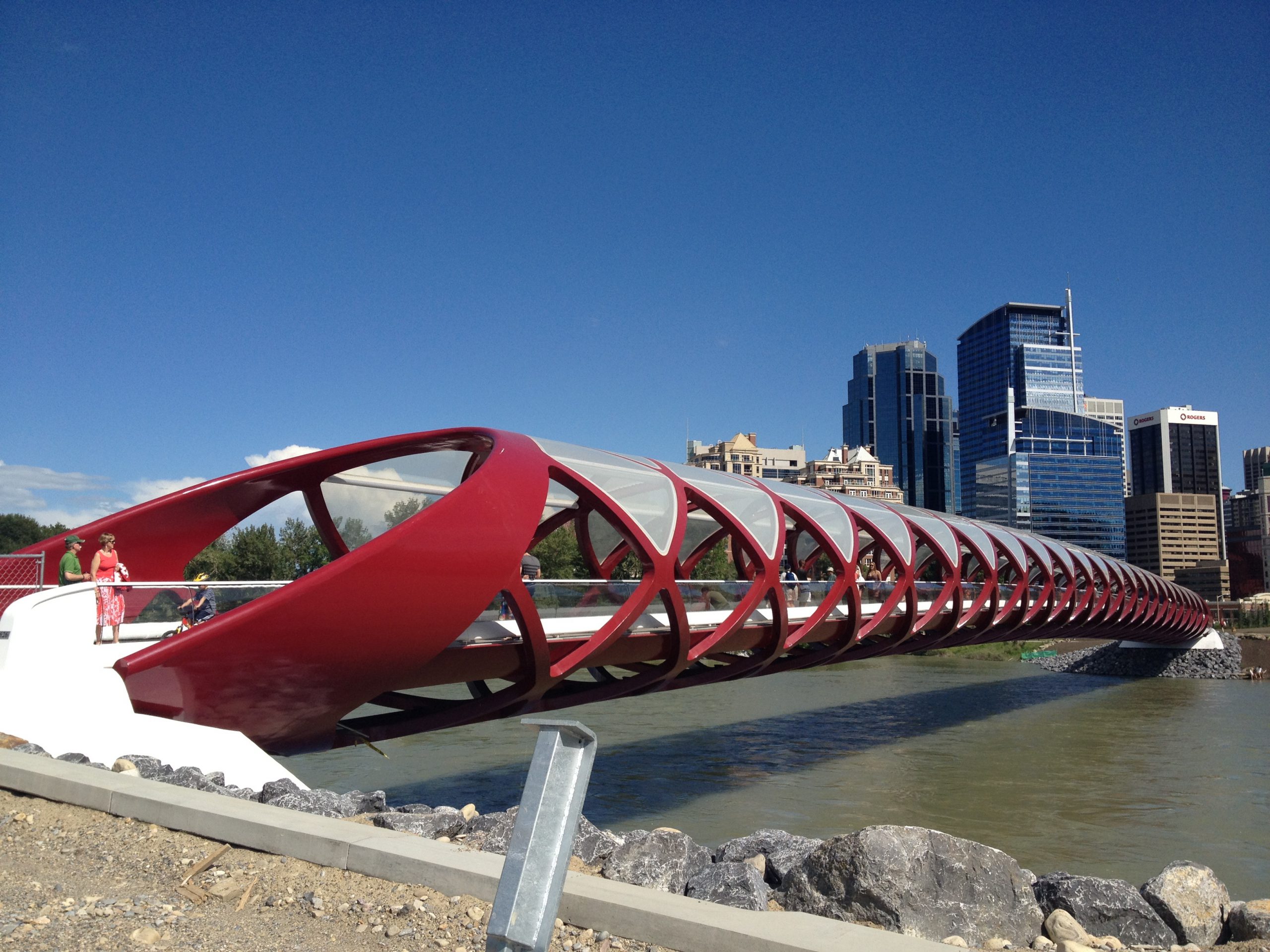 Calgary is divided into four quadrants (N.W., N.E., S.W., and S.E.) with streets and avenues laid out in a grid. There are close to 200 neighbourhoods and communities in the city. Here are some of the most popular areas in Calgary to explore:

Calgary’s downtown core is centred around Stephen Avenue (also known as 8th Avenue), a Calgary icon. Stephen Avenue is the city’s original entertainment and commercial district, where you’ll find plenty of patios and restaurants. Visit Saltlik or Modern Steak for a taste of Alberta beef. Catch a live performance or classic movie at the historic The Grand theatre or see contemporary art at the Glenbow Museum.

Established in 1875, the historic neighbourhood of Inglewood is Calgary’s original main street. Today, it’s filled with high-end restaurants, microbreweries, public art and trendy boutiques and businesses. Head to Gravity Espresso for a coffee, shop (or stop for breakfast) at Bite Grocer, and enjoy a beer at the Hose & Hound, once the site of an old fire hall. Inglewood is also where you’ll find Smithbilt Hats, makers of the iconic Calgary white hat. The neighbourhood even provides an opportunity to get up close with nature at the Inglewood Bird Sanctuary.

Kensington is a hip neighbourhood on the northern outskirts of the downtown core. Although it’s more than 100 years old and still retains the feel of a village, it is a popular destination for locals at night. Filled with boutiques and public art, the neighbourhood is easy to navigate by foot and filled with European-inspired cafes, such as Higher Ground, or head to the Regal Cat Cafe for kittens with your morning coffee. The Beehive is a local institution and sells products made from beeswax and honey.

The inner-city community of Beltline, south of the downtown core, is a popular Calgary neighbourhood. It’s home to great restaurants, artisan markets, and parks. With easy access to public transit, it’s a great community to live in if you don’t have a car. Spend time in nature at the Beaulieu Gardens, a terraced garden at the historic Lougheed House, or Central Memorial Park, one of Calgary’s oldest parks. The area is also known for the BUMP Festival (Beltline Urban Murals Project), where the neighbourhood is transformed into an open-air art gallery.

This is another inner-city neighbourhood, north of Calgary’s downtown, which makes it easy to navigate by walking, cycling or transit. On top of its reputation as a warm and inviting community with plenty of walking trails, it’s also known as Little Italy. There is no shortage of restaurants to visit, including La Brezza Ristorante and Blue Star Diner. The world-class Calgary Zoo is also based in Bridgeland. You can also visit the family-owned Lukes Drug Mart for soft serve ice cream and vinyl records, or Flyover Park, an urban park with public art and play structures.

The neighbourhood of Signal Hill in southwest Calgary is a blend of community, history, art and culture. Here you’ll find Battalion Park, a heritage site with large whitewashed stone glyphs, which are dedicated to the efforts of the Albertan soldiers in WWI. Shop at WestHills Towne Centre, or stop for dinner and drinks at the National Westhill.

Key considerations for moving to a Calgary neighbourhood

Calgary Transit is responsible for operating public transit. Calgary has two Light Rail Transit (LRT) lines, which are known locally as the C-Train. Note that the C-Train is free to ride between City Hall Station and Downtown West/Kerby Station in the downtown core. Calgary Transit also operates a total of 169 bus routes across the city, including four bus rapid transit lines (called MAX), which intersect with the red and blue C-Train lines. There are two bus routes with service to the Calgary International Airport.

Buses will accept cash fairies, but tickets for the C-Train have to be purchased at the station. If you are taking a trip that includes both bus and C-Train, you’ll need a transfer from the bus driver as proof of purchase before riding the C-Train. Fares are valid for a period of 90 minutes, and a one-day pass and monthly passes are also available.

There are plenty of opportunities to cycle in Calgary. In fact, there are almost 1,000 km of pathways and 96 km of multi-use trails that connect neighbourhoods, parks and outdoor areas. Some of the city’s best bike paths include cycling around Glenmore Reservoir, Fishcreek Provincial Park, and paved pathways on Prince’s Island Park. You can also visit Calgary by Bike for more resources and ideas on where to cycle.

The majority of Calgarians do own a car, but it is possible to navigate the city without owning one, thanks to its vast public transit system, bicycle lanes and services like Car2Go. The more densely populated the area you live in, the easier it should be to go shopping or get to work. However, winter in Calgary can be very chilly. If you choose to live car-free, be sure to invest in proper winter outerwear!

Tip: Avoid waiting for long times at bus stops or subway stations when it’s cold or dark outside. Download a free transit app for Calgary like Rocketman and use it to find out when the next bus or train is arriving. Rocketman allows you to track your bus along its route, save favourite stops, and get transit delay alerts in real-time. Learn more about using public transportation in Calgary.

Calgary offers a wide choice of recreational activities year-round. The city runs a range of recreation programs and activities for individuals and families, including art classes, golfing, hockey, swimming, yoga and tennis. Residents also have access to outdoor facilities, including opportunities to go skiing, try tubing, or ice skating at one of seven outdoor rinks in the city. In the spring and summer, visit one of Calgary’s many parks, including Fish Creek Provincial Park, the second-largest urban park in Canada, or Confederation Park, a natural wetlands area with a natural playground and multi-level fort, as well as picnic areas. The park also hosts the Lions Festival of Lights each holiday season.

The city is synonymous with the Calgary Stampede. For over 100 years, the 10-day festival has celebrated Calgary’s western heritage, First Nations culture and community spirit. Watch chuckwagon races, rodeo events, and live country music. GlobalFest is a multicultural celebration of dancing, music, food and fireworks that takes place each August. Or check out local and international theatre, dance, comedy and art at the High Performance Rodeo in January.

One of the great things about shopping in Calgary is there are many options. The city has shopping districts filled with fashion boutiques and one-of-a-kind stores all within walking distance, as well as shopping centres and malls. Some of the best places to shop include downtown Calgary. As well as 3,000 individual businesses, it’s also where you’ll find The CORE — a luxury shopping centre with brand-name stores including Holt Renfrew, Gucci, and Simons. 17th Avenue Street West is another go-to retail district in Calgary. It’s packed with everything from high-end fashion to vintage furniture to vinyl records and custom guitars. Kensington is also filled with trendy stores and handmade goods you won’t find elsewhere. Or visit CF Chinook Centre, Calgary’s largest mall. With over 250 stores, as well as dining and entertainment, you’ll find major department stores like Hudson’s Bay and Saks Fifth Avenue.

The Calgary Board of Education (CBE) teaches more than 125,000 students in over 245 schools, from kindergarten through Grade 12. The school board also offers Mandarin, French, German and Spanish bilingual language programs. The Calgary Catholic School Board serves more than 59,000 students in 117 schools in elementary and high school.

There are also a number of private schools, including Strathcona-Tweedsmuir School, which offers an International Baccalaureate (IB) program, along with Bearspaw Christian School and Banbury Crossroads School.

When it comes to post-secondary education, Calgary is home to the University of Calgary, one of Canada’s top research universities. Mount Royal University (MRU) offers undergraduate degrees and is known for its small class sizes and applied learning. The Southern Alberta Institute of Technology (SAIT) offers more than 100 programs in technology, business and trades.

The Crime Severity Index for Calgary is 90, considerably higher than the Canadian average of 75.01.