Moving to Edmonton may not seem like the most obvious choice for newcomers starting a new life in Canada. However, there are many reasons why this city should be on your radar. Not only does Edmonton have the largest urban greenbelt in North America, but it’s also known as the “festival city.” You’ll find a friendly city filled with historic neighbourhoods, excellent education, and incredible Canadian wilderness right at your backdoor. Here is what you need to know about living in Edmonton and some of the best neighbourhoods to explore.

Edmonton is the capital of Alberta and began as a fur trading outpost for the Hudson’s Bay Company on the Northern Saskatchewan River. Historically different nationalities have settled in Edmonton, and today it’s a multicultural city with a diverse heritage and a population of around 1.49 million people. 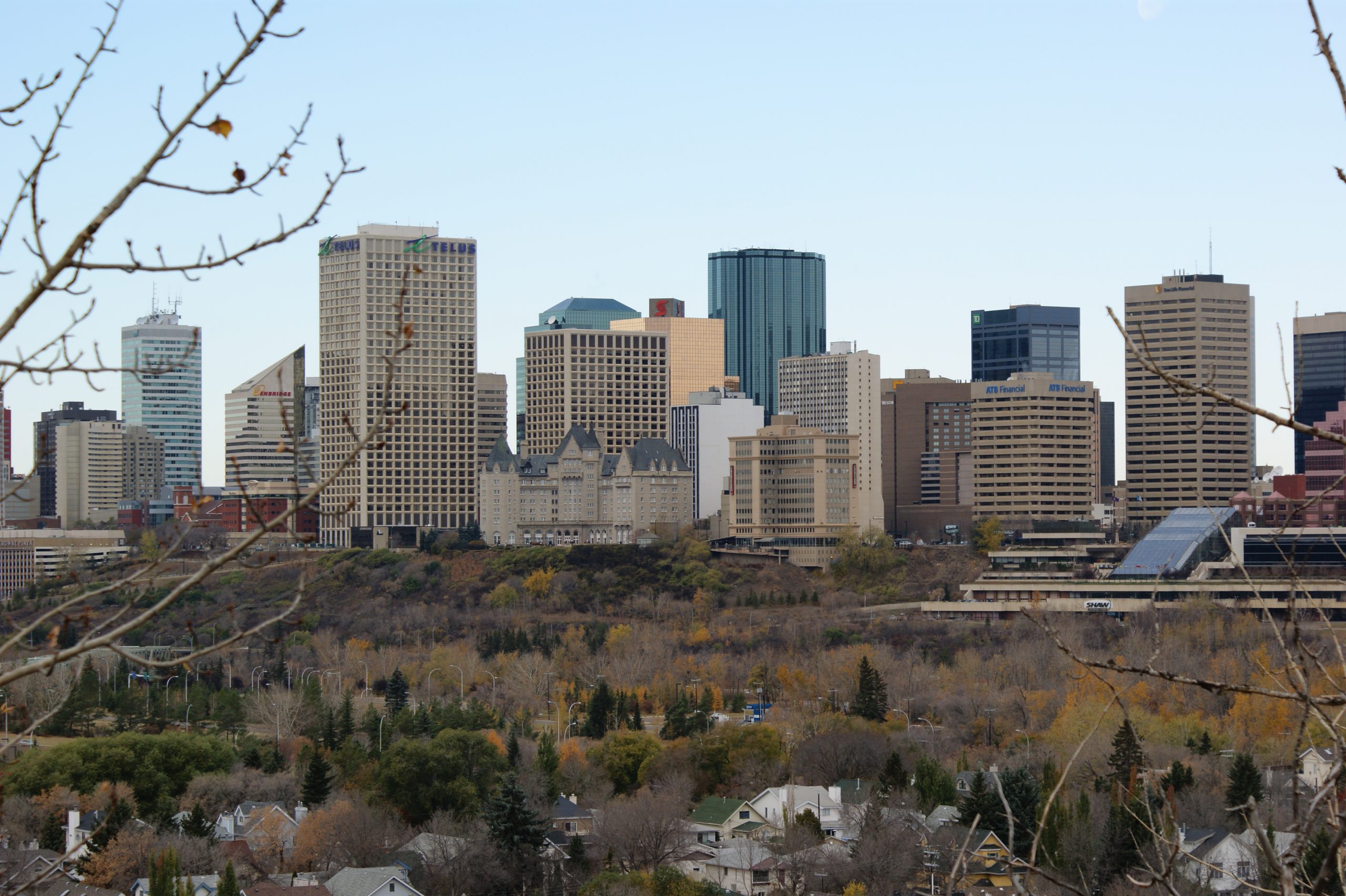 Edmonton’s downtown core has everything you could need if you desire city-living without the commute. In the heart of downtown, you’ll find some of the city’s best restaurants, sophisticated nightlife, and boutique shopping. The downtown core is also home to the Arts District, where office buildings sit beside galleries and theatres. Here you can visit the Royal Alberta Museum, the Citadel Theatre, and the Art Gallery of Alberta, which in itself is a stunning work of art. Downtown is also where you’ll find the vintage Neon Sign Museum, the first of its kind in Canada.

Westmount is located west of the downtown core and is considered one of Edmonton’s older neighbourhoods. Historical homes built in the 1910s and 1920s still exist today, and the area offers plenty of boutique shopping along 124 Street, as well as parks and recreation. Westmount Park runs for three blocks and contains an outdoor hockey rink, baseball diamond, playgrounds, water park and fitness centre.

This well-established neighbourhood provides easy access to Edmonton’s downtown. Ritchie has a vibrant edge with local cafes, boutique stores and the Ritchie Market. Here you can visit Edmonton’s first very distillery, Strathcona Spirits Distillery, for craft vodka and gin, or catch a theatre show or improv at The Grindstone. Ritchie is also a great area for cycling along the Mill Creek Ravine.

Strathcona is consistently voted one of the best neighbourhoods to live in within Edmonton. It’s close to downtown and the University of Alberta. In Strathcona, historic charm meets cool cafes and funky restaurants, like El Cortez. It’s also home to the perennial favourite smokehouse, MEAT. You’ll also find plenty of live music and entertainment, including the headquarters for the Edmonton International Fringe Festival, the oldest fringe festival in North America.

Located in south east Edmonton on the banks of the Mill Creek Ravine, Hazeldean offers plenty of opportunities to enjoy the outdoors. There’s easy access to the North Saskatchewan River Valley parks, where you can cycle, jog or hike.

Key considerations for moving to an Edmonton neighbourhood

Edmonton Transit Service (ETS) is responsible for providing public transportation with buses and light rail transit (LRT). Buses are the most common form of transit, and you can find out more about how to ride the bus in Edmonton here. There are also two LRT lines, The Capital Line and Metro Line, with service from the Northeast, NAIT, Grant MacEwan, Downtown, Government Centre, University and South areas of the city. Visit the LRT map for more information.

Once you pay for your fare, you have 90 minutes to complete your one-way trip, including transfers. You’ll need to get a transfer for travelling between the bus and LTR. For more information, see the ETS trip planning tool. Buses will accept cash fares, but to travel by LTR, you’ll need to purchase a ticket at a LRT station or through certified retailers. An unlimited monthly transit pass is also available.

Edmonton has plenty of opportunities to cycle. The city has an impressive 735 cycle routes to explore, including a downtown bike network of protected bike lanes, shared roadways and shared pathways. Downtown, Southside and West Central bike routes are open year-round, including the winter. You can find more information and inspiration on where to cycle at Bikemap. You can also visit an interactive map with bike routes in the rivery valley parks and citywide.

It’s possible to live in Edmonton without owning a car and instead relying on a combination of public transit and car sharing services such as Communauto. Neighbourhoods in Edmonton are large and spaced out, so to make it easier, consider moving to a centrally located neighbourhood where you’ll have easy access to public transit. And remember, winter in Edmonton is very chilly. If you choose to live car-free, be sure to invest in proper winter outerwear!

Tip: Avoid waiting for long times at bus stops or subway stations when it’s cold or dark outside. Download a free transit app for Edmonton like Rocketman and use it to find out when the next bus or train is arriving. Rocketman allows you to track your bus along its route, save favourite stops, and get transit delay alerts in real-time. Learn more about using public transportation in Edmonton.

Edmonton offers a wealth of recreational opportunities for residents. The city offers everything from golfing at one of three city-owned courses to swimming to basketball to public ice skating to drop-in shinny hockey. Or try cross-country skiing, bird watching, or organize a picnic in the River Valley.

Edmonton hosts over 50 festivals each year. Each February, celebrate the magic of winter with the Deep Freeze fest. In the summer, grab a blanket and picnic basket and head to the Heritage Amphitheatre in Hawrelak Park for Freewill Shakespeare Festival. Eat your way across the city at Taste of Edmonton, Western Canada’s largest food festival. Or take part in the Edmonton Heritage Festival, the world’s largest outdoor celebration of multiculturalism, highlighting cultures from Afghanistan to Zimbabwe.

Edmonton is home to West Edmonton Mall, a mammoth shopping destination with over 800 stores, many locally owned and operated. The mall also contains a waterpark, bowling and hotel. Edmonton City Centre is located in the heart of downtown. In addition to180 different retail stores, it has a movie theatre and an escape room. The city also has a number of shopping districts, where you’ll find luxury boutiques and farmers’ markets, including the Old Strathcona Farmers’ Market and Downtown Farmer’s Market. Whyte Avenue is one of Edmonton’s most popular shopping destinations, with unique stores like the Wee Book Inn, Blackbyrd Myoozik for vinyl records, and fashion-forward clothing at Bamboo Ballroom. 124 Street calls itself a “community of local creatives.” Here you’ll find antique stores, coffee houses, art galleries, unique fashions and independent boutiques.

The Edmonton Public School Board (EPSB) is the sixth-largest public school board in Canada and offers a variety of alternative programs for grade and high school students. It operates a total of 213 schools, educating approximately 102,000 students. The Edmonton Catholic School Board educates over 42,000 students at 100 grade and high schools. They also offer bilingual programs in French, Ukrainian, Spanish and Polish language. There are a few choices for private schools in Edmonton, including WISE (The Waldorf Independent School of Edmonton) and Progressive Academy for Grades Kindergarten to 12.

The University of Alberta offers undergraduate and graduate programs in humanities, sciences, creative arts, business and engineering. It’s also one of Canada’s top research universities. Concordia University of Edmonton offers over 45 degrees in the fields of science, management and the arts, as well as post-undergraduate degrees in education and public health. The Northern Alberta Institute of Technology (NAIT) offers programs in skilled trades, health and life sciences, and applied science and technology.

The Crime Severity Index for Calgary is 129, far higher than the Canadian average of 75.01.