Getting around Toronto by public transportation

The city of Toronto is Canada’s largest city, and is also home to many newcomers from across the world. Toronto is well-connected by public transportation and hence most people living in the city don’t feel the need to buy a car. Public transit in Toronto is one of the most convenient and cost-effective ways to travel and get around the city.

The TTC covers a large region including Toronto and the surrounding municipalities, known as the Greater Toronto Area (GTA). This article will cover the many different types of public transportation in the city and how to use them, along with the financial and environmental benefits of making public transportation your primary form of travel.

Tip: For an in-depth introduction to the multicultural city of Toronto and the province of Ontario, see the Ontario provincial spotlight article.

Getting around: Options for public transportation in the GTA

Within the GTA, there are plenty of different modes of public transportation.

The TTC operates the following transportation systems within Toronto:

1. Buses: Buses come frequently and are equipped with wheelchair and stroller-accessible entrances. Bus stops are located on either side of the road and mark the routes which arrive there. The destination and route number of the bus is displayed on the front and back of the vehicle. Once you are on the bus, its next stop will be verbally announced over speakers, so you know when to get off. Bus fares are paid at the machine directly beside the bus operator as soon as you enter the bus. Make sure you know how to ride the bus safely before you travel. Bus schedules vary by days of the week and times of the day.

2. The Subway: The TTC operates four subway lines underneath Toronto:

Metrolinx has plans to continue to expand existing lines, and create new lines, as the city evolves. Trains can be accessed by entering a subway station. Screens at each subway platform describe the next available trains, service announcements, and emergency information when necessary. See more on TTC subway accessibility, rules, and safety.

3. Streetcar: Streetcars in Toronto are powered by overhead electric cables. Riding the streetcar is similar to riding the bus. You enter the streetcar at a designated streetcar stop, and the next stops will be verbally announced to you so that you know when to alight. Streetcars are equipped with access ramps and priority seating. Learn more about riding TTC streetcars.

4. Trains: To travel to other municipalities in the GTA, you can catch the commuter GO train from Union Station, Toronto’s premier transit hub. The GO train runs trains to Lakeshore West, Lakeshore East, Niagara, Milton, Kitchener, Barrie, Richmond Hill, and Stouffville through the integrated Toronto transit system. See full GO train route options on the GO transit site. Your ride fare is calculated when you “tap in” and “tap out” of the system using your PRESTO card. Remember to always tap in and out, to be sure that you don’t get overcharged for your fare.

There is no extra charge to switch to another form of transportation (i.e. getting off the TTC subway to get on a bus) when you use your PRESTO card within two hours. If you do not have a PRESTO card, you can get a transfer ticket at the beginning of your first ride.

Getting out of the city on public transportation

For more distant locations such as the Toronto Islands or Hamilton, there are a few alternate forms of public transportation you can use. The Toronto Island Ferry operates outside of the TTC, so you need to use a separate form of payment. Visitors should reserve their ferry tickets online for their preferred sailing time.

Tip: Almost all public transit in Toronto is wheelchair and stroller friendly, but you can always check on TTC maps for a blue accessibility icon before you go to be sure. It is customary in Canada to leave priority seats on public transportation open, which are typically marked with accessibility signage, for seniors, strollers, and people with disabilities. See the Priority Seating FAQ for more information.

Planning your trip in the GTA: Maps, tools, and tips

With internet access, there are so many ways to plan your trip that allow you to reach your destination as soon as possible. To get oriented, first see the TTC comprehensive transit map which includes the Blue Night transit network, a separate schedule that runs after regular day hours.

You may choose to settle in other areas of the GTA and wish to commute to Toronto or other cities for work. See the GO train full GTA system map to determine your public transportation options in the extended GTA.

Rocketman is easy to use, showing you only the info you need to get you to your destination on time and with minimal waiting. Riders using the app can even see how full each transit vehicle is before boarding with the Crowdedness feature: by asking commuters to help other riders by reporting how crowded their transit vehicle is, and the app can display these crowdedness levels so all Rocketman users can be better prepared for their commute.

Ways to pay transit fares in the GTA

There are many ways to pay for your transit ride in the GTA. PRESTO cards are one of the best value options for frequent public transportation users.

How do you get a PRESTO card?

You can purchase a PRESTO card at any subway station entrance or the airport, and either load it with money as you need it or load a monthly pass. You can reload your card at the self-serve reload machine at TTC subway stations, or using the PRESTO app. Registering your PRESTO card online allows you to measure your balance, autoload your card, auto-renew your card, and protect your balance if your card gets lost or stolen. PRESTO cards can be used on TTC or GO train networks.

PRESTO cards are automatically set to adult fares, but students, seniors, and children are qualified to receive discounts on these fares. You can change your PRESTO card to reflect these discounts at any Shoppers Drug Mart or the TTC Customer Service Centre. Bring documentation showing your age and student status if you wish to change your fare.

Tickets are also available for a day pass or two-ride use. You must keep your card or ticket on you at all times on the TTC as proof of purchase.

Can you pay cash on TTC?

You may also pay with exact change on buses and streetcars, and receive a free transfer pass to use within two hours of your ride.

Can you still use tokens on TTC?

Transit tokens (equal to one fare) have also been used in the recent past in the GTA. Though they are no longer available for purchase from the TTC, you may still use them on transit if you acquire them from a third-party seller.

Tip: PRESTO card benefits don’t stop at convenient transit payment; you can show your PRESTO card at various attractions such as the Toronto Zoo or the Royal Ontario Museum for a 15 to 20 per cent discount. You can also use your card to get 20 per cent off a year membership of Bike Share Toronto. See the full list of PRESTO card perks.

Taking your bike on public transportation in Toronto

Pairing cycling with public transportation can cover great distances. The ability to take the train into downtown, and then bike the rest of the way to your office or a restaurant, can save you time and money. Not to mention, the added benefit of exercise from cycling.

Can you take your bike onto subways and buses?

You can take your bike directly onto the TTC subway during non-peak hours. Most TTC buses are also equipped with bike racks for easy transport. Many subway stations also have ample bike parking space (bike lockers, bike racks, and secure indoor bike parking stations) to lock up your bike while you use public transportation. You can also use the self-service bicycle repair shops located at over 20 subway stations on the TTC. 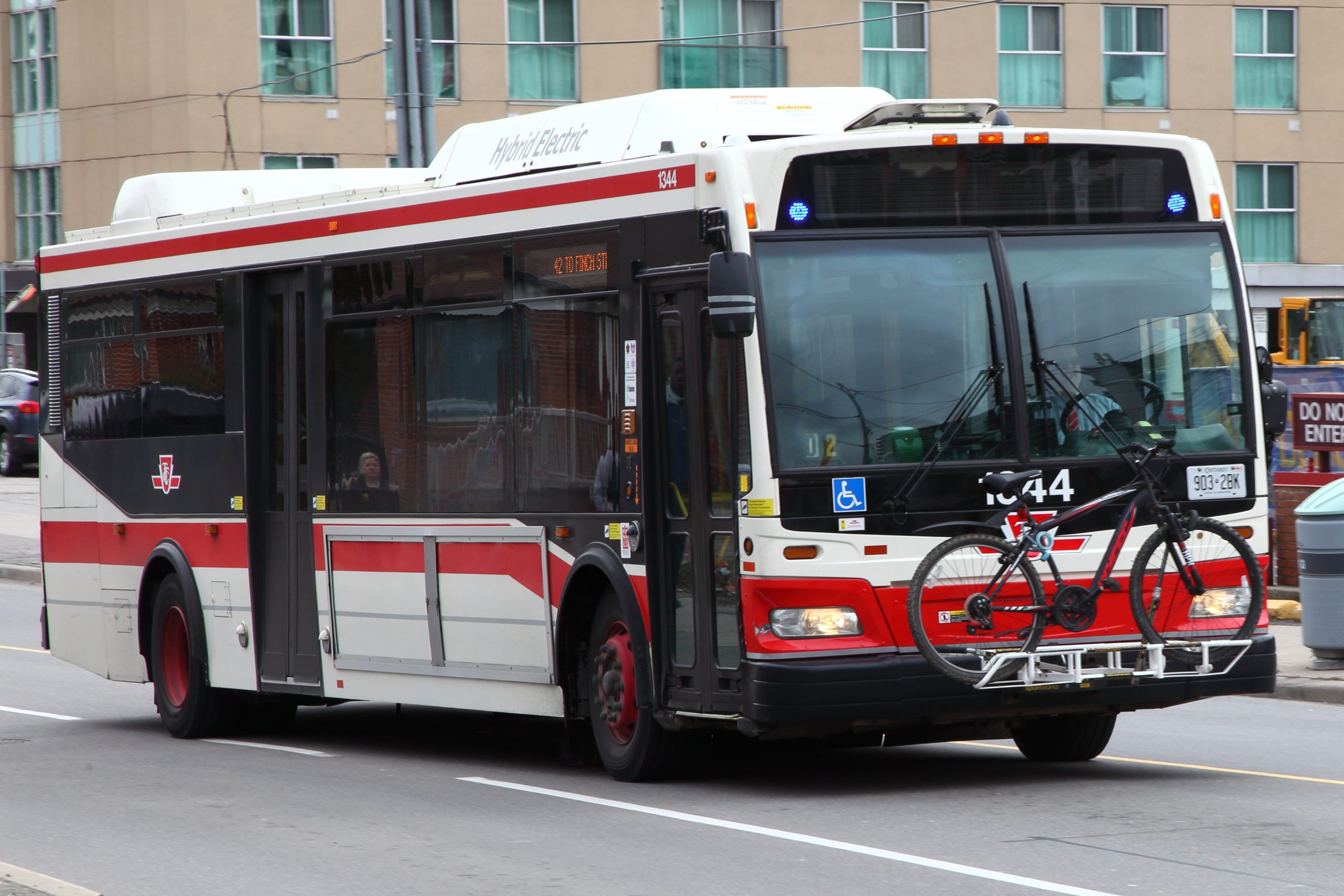 How much is it to rent a bike in Toronto?

Bike Share Toronto is another cost-effective option for those who wish to combine cycling and public transit. You can rent a bike for a single ride ($3.25 CAD), a day pass ($7.00 CAD), or sign yourself up for a whole year ($99.00 CAD), on the app or at any Bike Share kiosk. Bike stations are available throughout the city to pick up and drop off bicycles as you please.

Tip: Before cycling in Toronto, be aware of bicycle safety rules and the guidelines for bringing your bike on public transportation.

Greening your commute: Reducing your emissions by choosing public transit

As climate change and greenhouse gas emissions rise, Canadians are looking for places to cut down on their environmental impact. By choosing public transportation in Toronto instead of buying a car, you will be cutting down on your carbon footprint immensely and saving a lot of money, too. By adding cycling to your commute, you continue to reduce emissions and gain the added benefit of daily exercise.

Tip: You can measure your potential carbon footprint in Canada using Natural Resources Canada’s Greenhouse Gas Equivalencies tool. You can also read our article on living sustainably as a newcomer for more tips on reducing your carbon footprint.

Public transportation in Toronto is a convenient and inexpensive way to get around the city, especially compared to the cost of purchasing and paying to park a vehicle. Newcomers will find the TTC and surrounding transit systems easy to use and plan around and arrive at their destination in no time. Considering the added benefit of reducing carbon emissions, using public transportation is one of the best ways for Torontonians to travel around the GTA.