The cosmopolitan city of Montreal, Quebec, was established in 1642 on an island in the Saint Lawrence River. It is the second-most populous city in Canada and home to world-class cultural events and restaurants. If you’re planning to settle in Montreal, here is what you need to know.

Named Mount Royal, Montreal is the principal metropolis in Quebec. Many residents are bilingual, and both French and English are spoken. The city has a rich history dating back to the 16th century when it began as a missionary settlement but soon became a fur-trading centre. Today, Montreal has a population of over 1.78 million people. It has more recently seen newcomers settle here from France, Haiti, Algeria, Morocco and China. 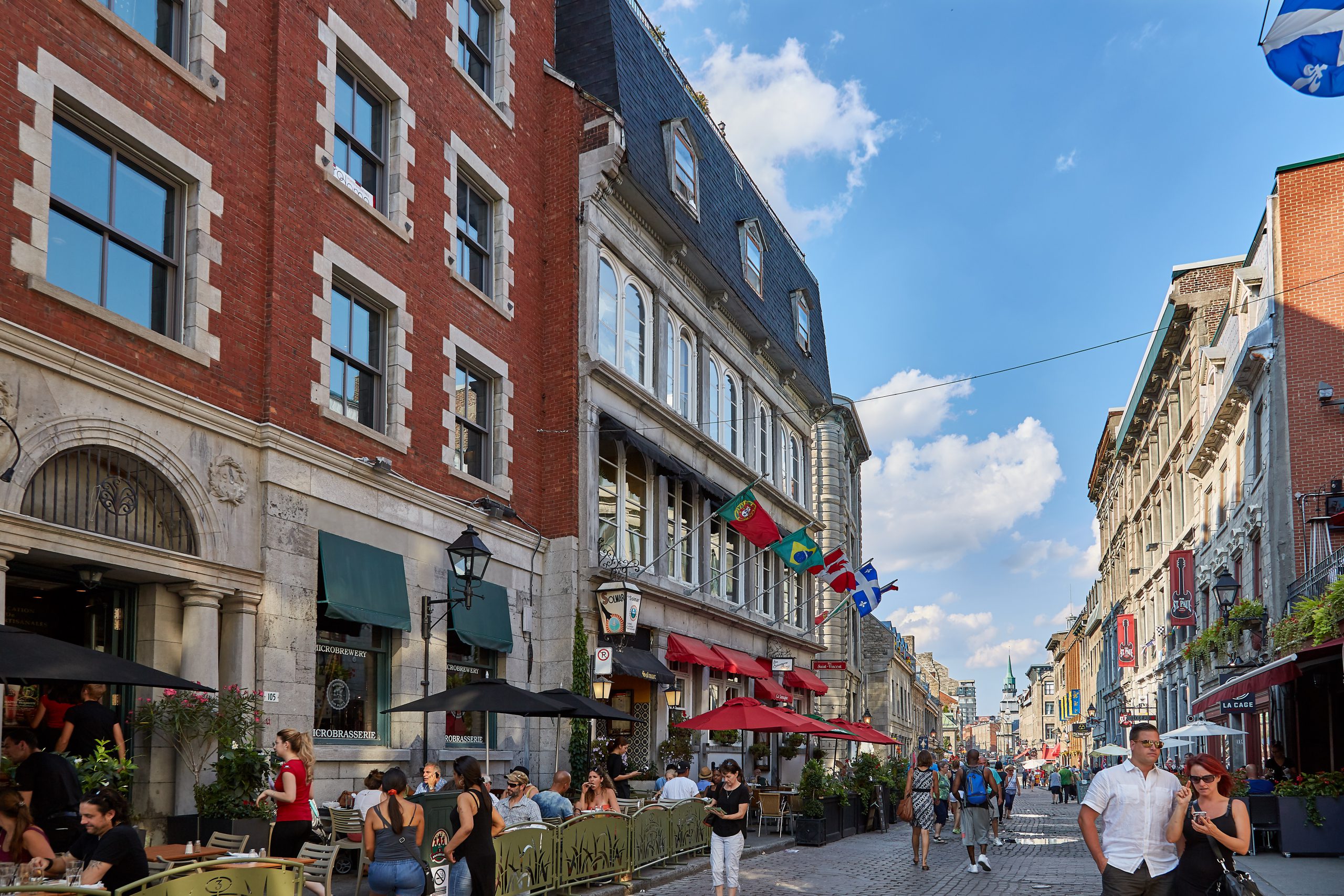 The boroughs that makeup Montreal are as unique and charming as the city itself. The city is full of diverse ethnicities and neighbourhoods that were once their own city. Here are some of the most popular areas to explore:

You can’t visit Montreal without seeing its historic core. This is where cafes spill out onto cobbled streets, cyclists bike along the harbour, and the city’s past can be retraced to 1642. Highlights include the stunning Notre-Dame Basilica with stained-glass windows and religious artwork. You can also learn about the history of Montreal at the Pointe-à-Callière Museum, or take a ride on the Grande Roue de Montreal Ferris Wheel for panoramic city views.

The heart of Montreal is its downtown core (Centre Ville). This area is Montreal’s central business district and home to some of the city’s best restaurants, festivals, and cultural institutions. Downtown is Quartier des spectacles, Montreal’s entertainment district and home to the Just For Laughs and Jazz Festival. The Musée des beaux-arts de Montréal is one of North America’s most visited museums, with around 41,000 works in its collection, and nearby is Musée d’art contemporain, home to contemporary art.

The Plateau is one of Montreal’s hippest neighbourhoods, where colourful homes with spiral staircases hide on residential side streets. There’s also no shortage of public art, shopping, and coffee shops. It’s also home to some of Montreal’s best-loved food spots, including authentic Montreal-style bagels at St-Viateur Bagel, smoked meat sandwiches at Schwartz’s Deli’s, and the Parisian-style L’Express bistro.

This neighbourhood is synonymous with Mount Royal, popular with locals and tourists year-round. Hike to the top of Mount Royal for views of the city, go skiing and snowshoeing, paddle a rowboat, or sign up for a guided nature walk. You can also visit the Saint Joseph’s Oratory of Mount Royal, one of Montreal’s most iconic landmarks. Below Mount Royal, visit Outremont, which is filled with bistros, cafes, and upscale boutiques. On its border is lively du Parc Avenue, now home to Montreal’s Greek community.

East of the city is the borough of Hochelaga-Maisonneuve, known as HoMa. This neighbourhood has seen a revival in recent years, and here you’ll find cafes, local businesses, and recycled factories. At Maisonneuve Market, pick up everything from baked goods, cheese, meat, and flowers, or visit the historic Château Dufresne. The area is also where Space for Life is located, a unique museum district that contains the Botanical Garden, Insectarium, Planetarium, and Biodome.

Key considerations for moving to a Montreal neighbourhood

Montreal is served by the Société de transport de Montréal (STM), which operates Metro trains and buses. STM spans the island of Montreal and covers some of the suburbs, including Laval, Lasalle, and South Shore. There are four interconnected Metro lines and various bus services. Unlike the Metro, which closes at midnight, bus services run 24-hours a day, including to the airport. For anyone living in the suburbs, Exo runs commuter trains with six different lines that cover the Greater Montreal Area.

Montreal has consistently been ranked as one of the top cycling cities in the world. The city boasts over 350 km of bike paths in Montreal and its surrounding areas. If you don’t own a bike, BIXI makes getting around a little easier. This bike-share company lets you rent more than 8,000 bikes at 660 stations in Montreal, Montreal East, Laval, Longueuil, Westmount, and the Town of Mount Royal.

Living in Montreal without a car is relatively easy, thanks to the combination of Metro, buses, shared taxibus service, cycling routes and care-share services like Communato.

When it comes to recreation, Montreal has activities for all seasons. With access to scenic bike paths, cycling is popular in the summer. Or play a round of golf, swim, or picnic in a leafy park. During the wintertime, try skiing, sledding, ice skating, or watch the Montreal Canadiens compete in hockey.

Minutes away from downtown Montreal, Parc Jean-Drapeau is an oasis that spans two islands in the middle of the St. Lawrence River. Popular with locals, it has 25 km of trails, a public beach, outdoor pools, an amusement park, and an open-air amphitheatre. Parc des Rapides in LaSalle is also an ideal destination for bird-watching, canoeing or fishing.

Montreal is a city of festivals. The Place des Festivals is an outdoor public square that hosts concerts and festivals, including free events as part of the Montreal Jazz Festival and Just for Laughs. IIn the winter, Luminothérapie captivates locals with illuminated buildings, pods and music. The Montreal Grand Prix takes over the city in the summer, or check out Montreal’s 11-day Mural Festival.

Sainte-Catherine Street is the shopping hub for Montreal. Here you’ll find everything from high street fashions, major department stores and shopping centres. Even in the dead of winter, when temperatures plunge, you can still shop in the Underground City (RESO). A network of 32 km of paths connects shopping centres and restaurants with subway stations. Not surprisingly, Montreal is a fashion destination, and Saint-Laurent Boulevard is home to local designers.

The education system in Quebec is a little different from other provinces in Canada. Here, education in French is compulsory for grade school students, unless you have attended a Canadian school in English, are a temporary resident, or First Nations. The other difference is students are required to do an additional year of schooling between completing high school and beginning university. Called CEGEP (Collège d’enseignement général et professionnel), it is a college-level requirement that offers preparatory technical college courses.

The Quebec school board offers elementary, secondary, college, and university education. There are nine different school boards in Montreal, including one English language school board, EMSB (English Montreal School Board), which teaches more than 44,000 students.

A wide selection of private schools are also available for elementary, middle, and high school students are also available in Montreal. Some of the more notable ones include the Study, Lower Canada College, and Selwyn House School. Montreal is also home to world-class universities, including McGill, the University of Montreal, as well as Concordia University.

Montreal ranks at 75 on the Crime Severity Index, which is almost identical to the Canadian average of 75.01.