As Canada’s largest city, Toronto, Ontario, is a popular choice for newcomers to Canada. And there’s plenty of reasons to settle here. It’s home to world-class restaurants, bars, and cultural events and is one of the most multicultural cities in the world. Toronto is a patchwork of neighbourhoods, and it might feel daunting deciding where to settle. Our guide lists some of the most popular areas in Toronto to help you narrow down your choice.

Toronto is the capital of Ontario and the largest city in Canada. It’s a leader in business, finance, technology, arts, and entertainment. It’s also one of the most multicultural cities in the world, with over 250 ethnicities and 170 represented in Toronto. 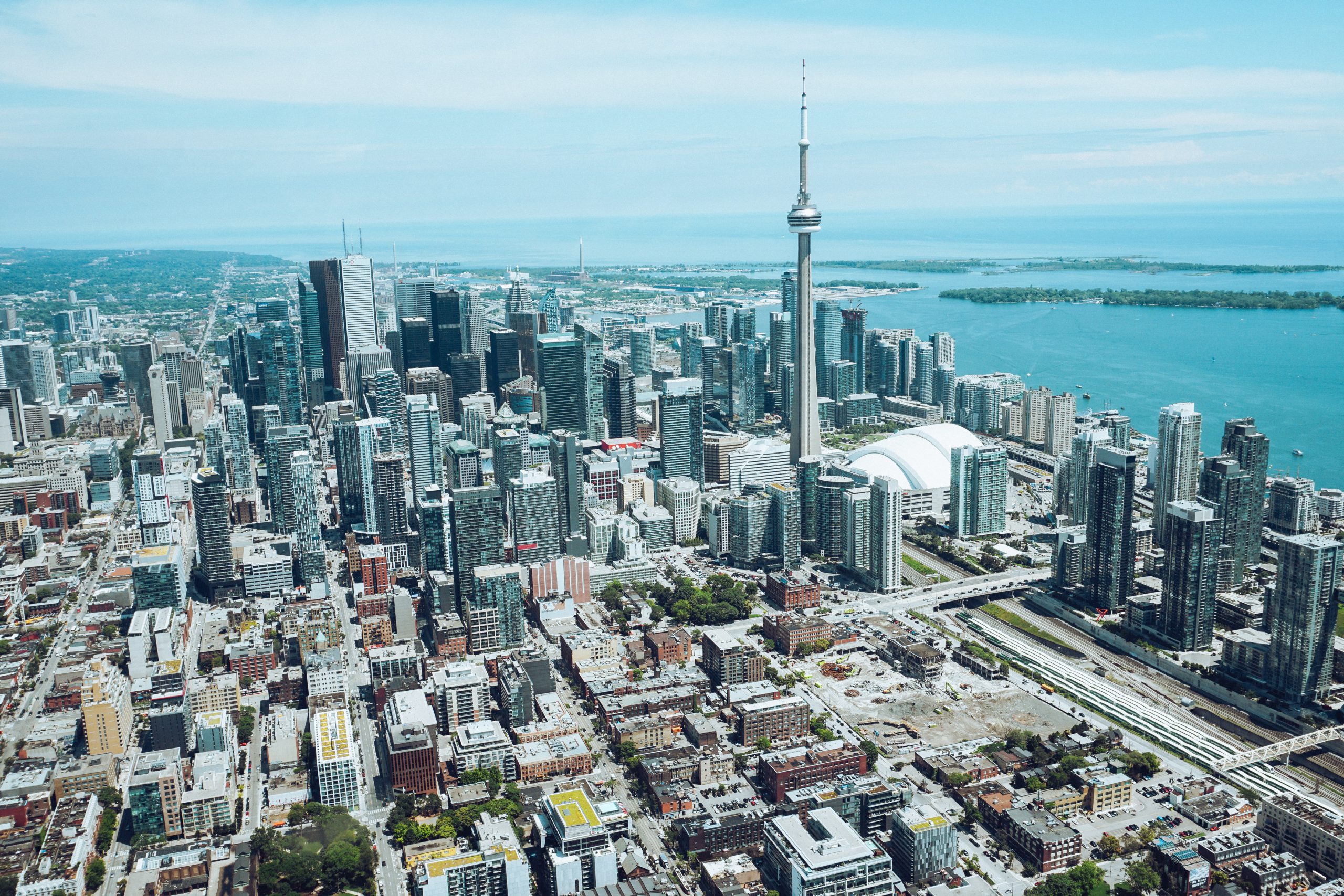 An aerial view of Downtown Toronto

Toronto is a city of neighbourhoods, each with its own character. Here are some of the most popular ones:

Toronto’s downtown core is the centre of the Financial District, Entertainment District, restaurants, as well as Church-Wellesley Village, Toronto’s LGBTQ+ community. The city is also sometimes referred to as “Tdot” or “The 6ix,” after Drake’s album Views From The 6 (later shortened to Views) was released.

Highlights include the CN Tower, Ripley’s Aquarium of Canada, the Rogers Centre (home of the Toronto Blue Jays), and Scotiabank Arena (home of The Raptors). The historic St. Lawrence Market in Old Town is a lively food market bustling with locals on the weekend. Nearby is the Distillery Historic District, a series of Victorian-era industrial buildings converted into art galleries, cafes, and artisans.

The west end of Toronto has long had a reputation as being the trendy part of the city. Queen Street West is known for its independent boutiques, lively bars and restaurants, and galleries. Little Portugal is an eclectic mix of restaurants, stores, and bars, and nearby Little Italy on College Street has a bustling restaurant scene. Toronto’s vibrant Chinatown sits west of Yonge Street, close to the Art Gallery of Ontario (AGO). Nearby is Kensington Market, popular for vintage clothing and international cuisine.

This area is named after High Park, Toronto’s largest public park with walking trails, picnic areas, gardens, sports facilities, and a zoo. The neighbourhood is a mix of European bakeries and delicatessens, restaurants, and stately Edwardian homes on leafy residential streets. Nearby, Roncesvalles is where you can visit independent gift shops, coffee shops, and restaurants. South of High Park is the Humber Bay Arch Bridge, one of the city’s most iconic structures. The bridge spans the mouth of the Humber River and is a great spot to view Toronto’s skyline.

The east end of Toronto is a community of distinct neighbourhoods and popular with families. Greektown on the Danforth is known for its authentic Greek restaurants, bars and pastry shops. Nearby is Little India, a colourful neighbourhood with authentic Indian cuisine and the Gerrard India Bazaar. Leslieville attracts plenty of families and is known for its cafes, restaurants, and one-of-a-kind stores. East of Leslieville is the Beaches. In the summer, locals and visitors flock to the sandy beaches along Lake Ontario or catch the Beaches Jazz Festival each July. North of the Beaches is the Aga Khan Museum, the first museum in North America dedicated to Islamic and Iranian art, as well as Muslim culture.

Located east of The Beaches, the multicultural community of Scarborough is known for having some of the best ethnic food in Toronto. It’s also home to Scarborough Bluffs, which extends 15 km with views of Lake Ontario.

Yorkville is Toronto’s answer to Fifth Avenue. The area is filled with luxury stores, gourmet restaurants, picturesque Victorian homes, as well as the Royal Ontario Museum (ROM). The neighbourhood of Yonge and Eglington is the heart of Toronto’s midtown. The main intersection is home to businesses, stores, and restaurants. And on the quieter side streets, you’ll find upscale homes and condos. Nearby, you can explore an authentically recreated country 1860s village at Black Creek Pioneer Village.

Key considerations for moving to a Toronto neighbourhood

The Toronto Transit Commission (TTC) is Toronto’s primary transit system. It is made up of subways, buses, and streetcars that interconnect and cover approximately 1,200 km. GO Transit is Toronto’s regional public transit service and serves the Greater Toronto and Hamilton Area. Trains depart from Union Station regularly. You can also download the free Rocketman app to get real-time schedules on Toronto’s public transit.

The UP Express connects downtown Toronto to Toronto International Pearson Airport and runs in either direction twice an hour. Cycling is a popular mode of transportation in Toronto. The city has supported cyclists by building and maintaining bike lanes, multi-use trails, and adding bike parking facilities. With a comprehensive and regular transit system, coupled with designated bicycle lanes on major Toronto streets, it’s easy to get around the city without a car. Read more about public transportation in Toronto.

The city is also a major shopping destination, with everything from malls to luxury designer stores to vintage shops to high street fashion. Bloor-Yorkville is known for its luxury stores and Queen West for cutting-edge fashion, art galleries, and hip restaurants. Situated in downtown Toronto, the Toronto Eaton Centre spans from Queen West to Dundas Street and has more than 230 retailers and restaurants. North of the city centre, Yorkdale Shopping Centre is connected by the TTC and has more than 250 stores.

Toronto ranks at 66 on the Crime Severity Index, slightly lower than the Canadian average of 75.01.